So time for change upcoming, packing my bags current for a move south. Be enjoying you soon Melbourne town. Some additional ballad(s) reviews have come in, my thanks to Peter Lach-Newinsky for the translation on one. I’m in Brisbane this weekend (13th-15th) for another Cage dedication with Lawrence English. It’s a pretty great program in dedication of a wonderful human being. Also, look out Japan, I’ll be visiting your shores come early May. I’m playing a live version of ballad(s) come the 6th, details to come… lots! 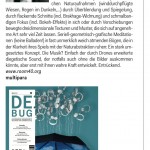 ‘Let’s imagine Wolfgang Voigt had made video the basis of his gas/lead project – and worked in a more focussed and dense way: then somthing like these six excellent pieces of this debut DVD might have resulted.
Scott Morrison from Sydney – who has already been travelling the international circuit for the last few years – creates moving three-dimensional textures and patterns that take their time in a very pleasant way using simple nature recordings (wind-ploughed meadows, rain in the dark…), montages and mirrorings, flickering cuts (including a Brakhage dedication) and narrow-band focus (including Bokeh effects). Serial, geometric, graphic meditations (no ballads!) in almost unnoticeable, softly breaking arcs which rest in the clarity of their play with natural abstraction: a strongly realised concept. The music? Simply diegetic sound expanded with drone which could, if necessary, have done without the images but only develops true power together with them. Transporting.
www.room40.org
multipara’
This entry was posted in Uncategorized. Bookmark the permalink.